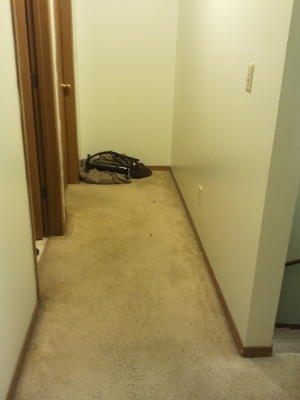 One night when I was very tired, I saw a cockroach on the floor outside my bathroom. It was alive, but not moving. I grabbed the closest heavy thing I could find—a large bottle of laundry detergent—and pressed it hard into the carpet where the cockroach was sitting. When I lifted the bottle up, the cockroach was still quite alive, and it started skittering all over. Being tired and lazy, I just set the bottle of detergent back down on the cockroach, thinking that I would leave it there and wait for it to die. I knew this might take a while, since evidently cockroaches can live for weeks with their head cut off or something like that.

After a week or so, the bottle was still there right where I had left it: in the hallway outside of the bathroom between my bedroom and my roommate’s. I had no way of knowing whether the cockroach was alive or dead at this point, or if it was even still under there. Maybe it had managed to squirm it’s way out. But if I lifted the bottle and it was still there, and it was still alive, it would surely start skittering again. Blech.

Another week maybe, and I come home to find that the laundry detergent bottle had been moved to the other side of the hallway! So either my roommate or his sister, who was visiting at the time, moved the bottle, probably thinking “Why has this laundry detergent bottle been sitting in the hallway for two weeks?” And when they moved the bottle they either found a dead cockroach, or an alive cockroach, or nothing. I have no idea.